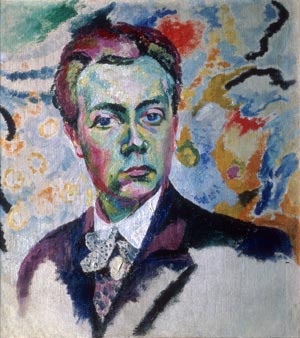 Robert Delaunay is a French painter born on April 12, 1885 in Paris.

With his wife Sonia Delaunay and a few others, he was the founder and main architect of the orphism, an important avant-garde movement of the early 20th century that derived from cubism.

His works on color were inspired by several theories from the law of simultaneous colors contrast, formulated by Michel-Eugène Chevreul. By a work focused on the arrangement of colors on canvas, he wanted to reach a pictural harmony.

elaunay was part of a generation of avant-garde artists, particularly prolific between 1912 and 1914. He became friendly with the poets Guillaume Apollinaire and Blaise Cendrars, the Russian painters Vassily Kandinsky and Michel Larionov, the German painters August Macke and Franz Marc and the slovak Geza Szobel.

After the war, he became acquainted with the artists of the surrealist movement, making several portraits of them, without adopting their point of view and their artistic visions. He will have a strong and lasting friendship with the poet Tristan Tzara.

His name is also associated with the Eiffel Tower, which he saw during its construction when he was four years old, and which he painted many times throughout his career, using different methods such as neo-impressionist, cubist, and then with his simultanist method.